Use our interactive CVT diagram to learn how your CVT Transmission works. Raise and lower the RPM of your virtual GY6 engine by pressing the Up and Down keys. To get started, press GO. We’ll explain each part and it’s function down below after you’re finished playing.

What is a CVT?

CVT stands for Continuously Variable Transmission. It’s a fully automatic setup, but unlike the auto transmission in your car, the shifting of the CVT is completely seamless with no steps.  This simple, but very clever design takes advantage of a reinforced rubber V-belt to transmit engine power, while at the same time it transmits shift feedback through the system to determine the gear ratio.

The three main components are two pulleys and the V-belt.

Each pulley has two halves, one that is fixed and another that slides axially along a sleeve on its shaft.  These pulleys are often thought as both being clutches, but this isn’t true – only the rear pulley contains a clutch. 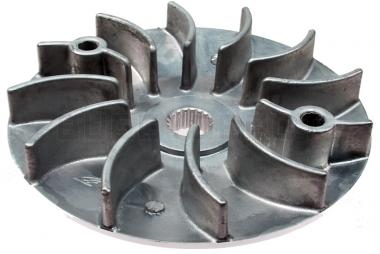 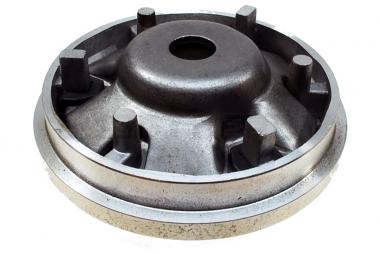 The halves above make up the front pulley – called the Variator .  The Variator is bolted directly to the crankshaft and is never disengaged, and rotates on a 1:1 ratio with the crank at all times.

The variator has two jobs:

The variator has 6 ramped slots, each containing a barrel-shaped weight.  As the engine RPMs increase, these roller weights (shown in green in the simulator) fly outwards, up the ramps.

When this happens, a chain of events occurs.  The gap where the belt sits is forced to close, which then causes the belt to ride higher on the front pulley.  The belt pulls tight in the rear and forces the rear pulley to open the gap between its halves.

The larger rear pulley is what we refer to as the Clutch Pulley (it’s on the right side in the simulator above).  It contains a centrifugal clutch, which allows the vehicle to idle without moving once the engine speed drops below 3000RPM.

Once the vehicle gets moving, this pulley’s job becomes to sense changes to road/trail conditions, helping to lower the gearing ratio as the load increases.   Under load the rear pulley will automatically close its halves proportionate to the load, which then pulls the belt tight and forces the variator to open correspondingly, matching the new lower gear ratio dictated by the rear pulley.

A Continuous Variable Tug of War

The pull of each pulley of the CVT can be thought of as tug of war, forces and counter-forces interact in a very dynamic way to determine the active gear ratio at any given moment.   Ultimately determined by vehicle speed, load, and applied throttle.

A healthy CVT transmission must have adequate air flow.   The original strainer/filter boot on the front of the CVT tends to clog with dust and debris.  Be sure to make periodic checks to clean the inlet during rides.  Neglecting this very often results in prematurely snapped belts, flatted rollers, and overheated clutches.

5 thoughts on “How the CVT Transmission System works”